His Highness The Amir Sheikh Tamim bin Hamad Al Thani and HE Prime Minister of Belgium, Charles Michel, held on Tuesday a round of official talks at the cabinet’s headquarters at Egmont Palace in the capital, Brussels.

At the outset of the session, HE the Prime Minister of Belgium welcomed HH The Amir and the official delegation, expressing his delight at the visit of HH The Amir to Belgium, which will enhance bilateral relations between the two friendly countries.

For his part, HH The Amir expressed his thanks for being invited to visit Belgium, which will help in developing bilateral relations in the different fields.

The session discussed means of boosting mutual cooperation in the fields of energy, economy, investment, culture, sport and health.

HH The Amir and HE the Prime Minister exchanged views on regional and international developments, particularly the current challenges in the Middle East and Europe, notably the phenomenon of terrorism and means combatting and uprooting it as well as eliminating its sources of financing.

Their Excellencies members of the official delegation accompanying HH The Amir attended the session.

On the Belgian side, a number of Their Excellencies ministers and senior officials were also present.

An official reception ceremony was held for HH The Amir Sheikh Tamim bin Hamad Al Thani upon his arrival at the cabinet’s headquarters on the occasion of his official visit to Belgium.

His Highness The Amir Sheikh Tamim bin Hamad Al Thani and HE Prime Minister of Belgium, Charles Michel, witnessed the signing of two cooperation agreements between the two countries.

HH The Amir and HE The Prime Minister witnessed the signing of an air services agreement that facilitates the operation of commercial flights between the two countries.

The agreement includes granting the rights to designated carriers to operate from and to the two countries, aviation security, and other articles that facilitate the operation between the two parties for carriers.

HH The Amir and HE the Prime Minister also witnessed the signing of a cooperation agreement between Qatar University and the University of Hasselt in the Kingdom of Belgium, aimed at strengthening academic and research cooperation between the two universities and exchanging experiences and visits between researchers, students and faculty members.

Their Excellences members of the official accompanying delegation attended the signing ceremony.

A number of Their Excellences ministers and senior officials from the Belgian side attended the signing ceremony as well.

His Highness The Amir Sheikh Tamim bin Hamad Al Thani met on Tuesday with HM King Philippe of Belgium at the Royal Palace of Brussels.

During the meeting, the two sides reviewed bilateral relations and exchanged views on a number of topics of mutual interest.

His Highness The Amir Sheikh Tamim bin Hamad Al Thani and HM King Philippe of Belgium met on Tuesday with a number of businessmen, investors and chairpersons of major firms in Qatar and Belgium who are taking part in the Qatari-Belgian Business Forum, organized by the Ministry of Economy and Commerce and Qatar Chamber of Commerce and Industry in cooperation with the Belgian company union, during a reception ceremony that was held for that occasion at the union’s premises in Brussels.

HH The Amir and HM the king exchanged views with a number of participant businessmen on opportunities of enhancing economic cooperation, trade exchange and investment between the two friendly countries.

His Highness The Amir Sheikh Tamim bin Hamad Al Thani met today with HE President of the Senate of Belgium Christine Defraigne, HE Speaker of the House of Representatives Jifred Prabki, as well as a number of members of the Belgian Parliament.

During the meeting, a number of issues of mutual interest were reviewed, especially the prospects for cooperation between the two countries, as well as the latest regional and international developments.

Upon arrival at the parliament premises, HH The Amir toured the building accompanied by the President of Senate and the Speaker of the House of Representatives, where His Highness was briefed about the history of the parliament premises and the legislative and supervisory functions of the two councils and their rules of procedure.

HH The Amir was accompanied by their Excellencies members of the official delegation. 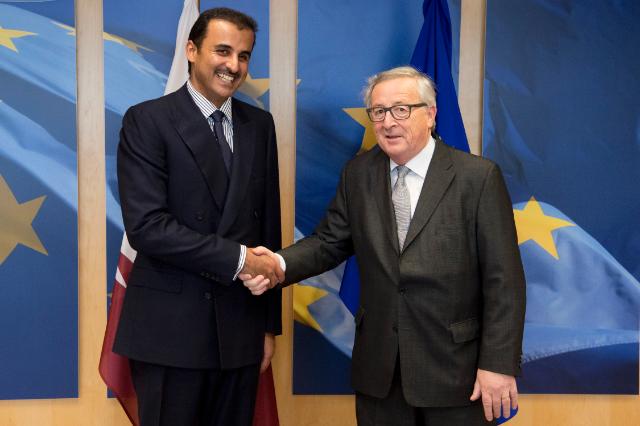 H.E Jean-Claude Juncker, President of the #EC, and H.E Federica Mogherini, High Representative of the Union for Foreign Affairs and Security Policy and Vice-President of the EC, receive HH Sheikh Tamim bin Hamad Al-Thani, Emir of #Qatar and signing of a cooperation agreement

HH the Emir Witnesses Signing of Cooperation Arrangements with EU

HH the Emir Sheikh Tamim bin Hamad Al-Thani on Wednesday witnessed the signing of cooperation arrangements between the Ministry of Foreign Affairs and European External Action of the European Union, held at the European Commission headquarters in Brussels.

The cooperation arrangements were signed by HE Prime Minister and Minister of Interior Sheikh Abdullah bin Nasser bin Khalifa Al-Thani and HE High Representative of the European Union for Foreign Affairs and Security Policy Federica Mogherini.

The arrangements aim to support and promote the relations between both sides through encouraging exchanging information and consultation. It also aims to strengthen the mutual understanding and dialogue development between both sides in order to achieve the goal and mutual objectives in fields of common interest.

The signing was attended by Their Excellencies the members of the official delegation.

The meeting was also attended by senior officials in the European Union.

HH The Amir meets with the Secretary General of NATO 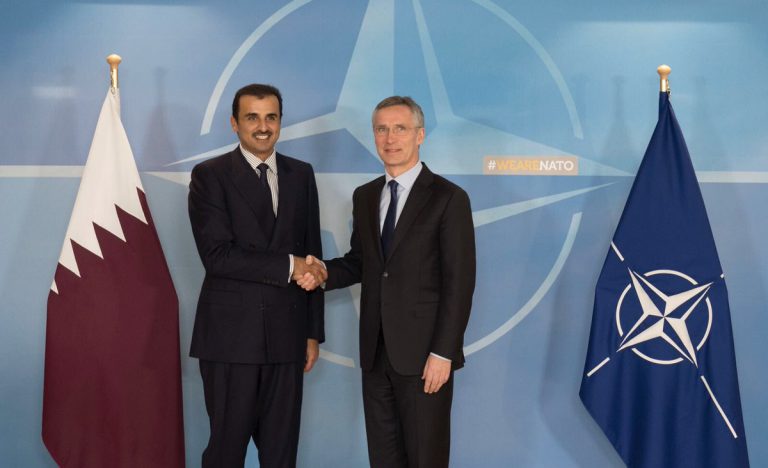 The meeting reviewed the relations between the State of Qatar and NATO and the future of their joint cooperation, especially on military and security issues. It also exchanged views and consultations on the current political developments and the challenges facing the region and the world as a whole and the promotion of international peace and security.

The Secretary-General of NATO thanked His Highness the Emir and the role of the State of Qatar and its efforts in the fight against terrorism and its cooperation with NATO in this area.

During the meeting, an agreement was signed on cooperation in military and security matters between the Government of the State of Qatar represented by the Qatari armed forces and the North Atlantic Treaty Organization (NATO).

The signing was attended by the members of the accompanying official delegation.

It was also attended by a number of senior military officials from both sides. 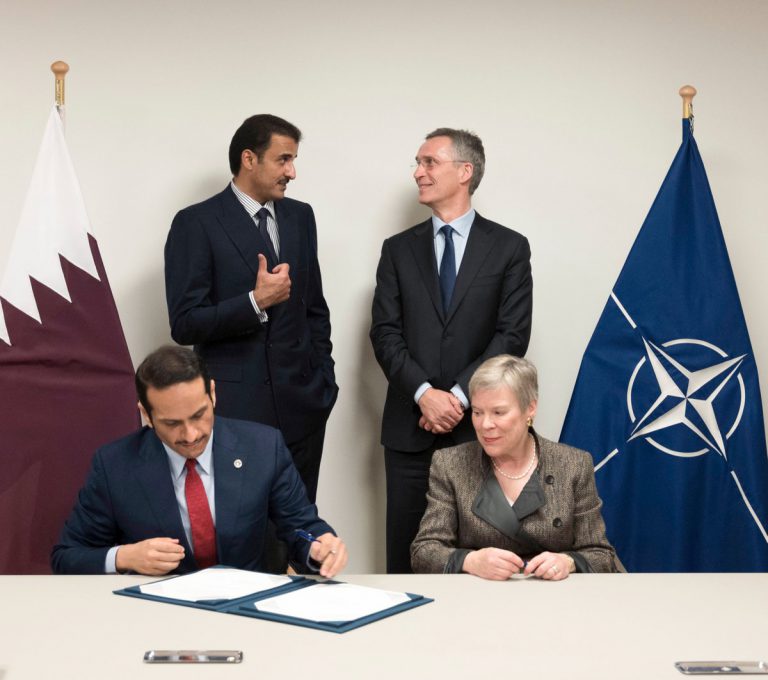 HH the Emir Sheikh Tamim bin Hamad Al -Thani, and HE Secretary General of the North Atlantic Treaty Organization (NATO) Jens Stoltenberg witnessed the signing of an agreement on cooperation in military and security issues between the Government of the State of Qatar, represented by the Qatari Armed Forces and the North Atlantic Treaty Organization (NATO), at NATO headquarters in Brussels this evening.

The agreement was signed by HE Deputy Prime Minister and Minister of Foreign Affairs Sheikh Mohammed bin Abdulrahman Al-Thani , and HE Deputy Secretary-General of NATO Rose Gottemoeller.

The signing was attended by Their Excellencies members of the accompanying official delegation.

It was also attended by a number of senior military officials from both sides.

Brussels – Information Office – November 27 HE Secretary-General of the Ministry of Foreign Affairs Dr. Ahmed bin Hassan Al Hammadi met on Wednesday with HE EU Commissioner for the Migration, Home Affairs and Citizenship Dimitris Avramopoulos in the Belgian capital Brussels.During the meeting, they reviewed the cooperation relations between the State of Qatar and the […]

H.E Abdulrahman bin Mohammed Al khulaifi, Ambassador of the State of Qatar to the Kingdom of Belgium, the Grand Dutchy of Luxembourg and the Head of the State’s mission to the European Union and NATO had a fruitful exchange with Afghan Ambassador in Brussels @Nsalarzai. They discussed the general situation in #Afghanistan, the ongoing Afghan […]

HE Sheikh @KBKAlThani, Prime Minister and Minister of Interior, witnesses the joint Barzan final training (9), which was organized by the Amiri Guard at Lehsiniya Camp to achieve unprecedented security integration.